Back to the Future with Claudia Wells

Claudia Wells portrayed Marty McFly's girlfriend in Back to the Future.  Unfortunately, she decided not to reprise her role in the sequels, due to her mother's battle with cancer.  It is probably not huge news, but that type of family commitment is refreshing and should be noted..
We met Wells at the Motor City Comic Con a few years ago.  She looked great and seemed to be having a fun time meeting her fans.  When the celebrities are having fun, it is a good bet that the fans will have fun, too.
Wells had recently returned to acting.  After appearing in tv's Brothers in 1986, she had stayed away from acting until 2008.  She appears to be working steadily these days.
I really liked Wells.  She played a major role in an iconic movie, but chose family over her career.  I suppose it is that sane attitude which endeared her to so many fans at the show. 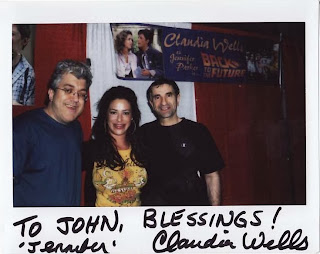