Michele Mupo (aka Fuchsia) has to be one of the busiest people I know.  She is also one of the most talented.  She is involved in music, entertainment, television, wrestling, charity and much more.
Michele is the President of MUDA MultiMedia Entertainment.  She produces The Michele Mupo Daily, which has been known to feature some of my pieces.  It is always full of fun stuff and definitely worth a look. Michele's pet project is Keep the Peace.  You can check out Keep the Peace on Soundcloud, along with some of Michele's other songs.
Michele has met a ton of celebrities (probably more than me).  One of those celebrities is former One Life to Live actor Kamar de los Reyes, as seen in the picture below.
I was lucky enough to meet her once, but hope to catch her again sometime.  In the meantime, I will keep reading The Michele Mupo Daily, following Fuchsia on twitter and enjoying her music, like Keep the Peace! 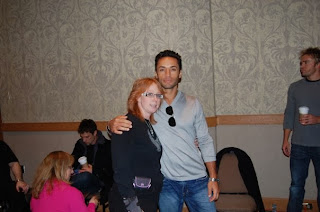