This is a recurring series which attempts to combine my lifelong passion for trading cards with my semi-professional interest in celebrities.  Today, I am once again featuring celebrities to represent teams eliminated from the NFL playoffs.

I am cheating just a bit with my Oliver Luck Celebrity Jersey Card (but it's my site and my series). Luck is actually representing the Colts, through his son.  Andrew's father actually played for the Houston Oilers, but he never had any Topps football cards (although I believe he had a Topps sticker, but I digress).  Luck's best shot at a card would have been the 1984 Topps sett, but oddly it id not contain any quarterbacks for the Oilers.  That rarity really hurt Luck, but at least I am here to help with my take on what would have been his rookie card in 1983. 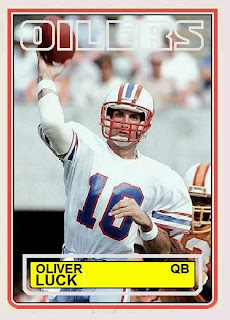 A native of New Orleans, Harry Connick, Jr. has stayed true to his roots.  Connick is a long-time Saints fan and can often be seen at games and wearing the jersey.  I give him extra points for the Saints cap and for the overall look which fits in perfectly with the 1978 Topps appearance. 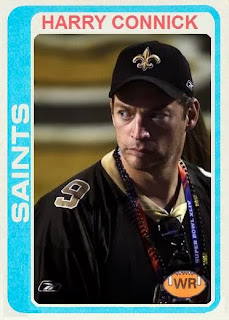