I met Stoney McGee through Resistance Pro Wrestling.  Stoney is just a good dude.  He is beloved by all and he spreads the love to all.  It is a pleasure to know him.
The Stone Man is a valuable asset to R Pro.  He is the man of many hats.  He is a diehard staunch supporter of R Pro.  They guy lives and breathes R Pro and works tirelessly to help build R Pro.
I love the guy, like I love the rest of the R Pro family.  They are just a great bunch of people and I am proud to be a part of it all.
Stoney met Skates (an old favorite of mine) at a charity plane pull last summer.  Unfortunately, I could not be at the event, but JohngysBeat.com's Scott Steiner (okay, he is really R Pro's Scott Steiner, but I borrowed him) covered the event at On the Beat with Resistance Pro at the Special Olympics Plane Pull.  Stoney is in the video, but Skates is not.
Fortunately, Stoney provided me with this proof of the meeting between himself and the famous mascot of the Chicago Wolves.
Thanks for this Stone Man and thanks for all you do and for being a friend. 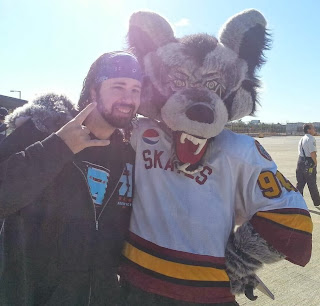 Stoney McGee and Skates at O'Hare Airport, IL-September 2013.
Posted by Johngy at 6:00 AM