Kane Hodder is a big dude who has played some horrific characters in films and has had some incredible kill scenes.  He certainly casts an imposing image.  That image though does not show the true Kane Hodder.
Hodder is a stuntman, actor and author.  He is also a very good guy.
Hodder was severely burned in an accident on set.  He still often wears gloves to cover the scars.  He spends time with children in burn units.  As a former hospitalized child, I appreciate his efforts with these kids.  Any extra attention they get is well received.  That is just the kind of guy Hodder is.
I first met him at a horror convention and I interviewed him there.  I have since met him several times and he is great every time.  He is definitely a JohngyBeat.com favorite.
If you see Hodder at a convention, talk to him and you will probably like him, too. 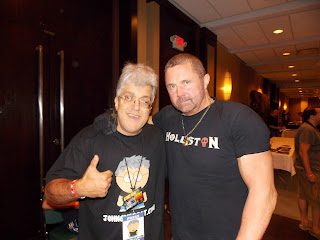 I wasn't crazy about the Hatchet movies, but I liked his portrayal of Jason. Have you seen him in the Adam Green tv show "Holliston"? Not only is he a great horror actor, he is pretty good with goofy comedy too! He and Danielle Harris were the highlight of season 2 of "Holliston."

Jason-
I agree on all fronts. I have seen Kane's humor at the shows, too. In fact, I have a video I need to edit of him joking with me and Joe Knetter and Sarah French. They are all just super people.