Where is Shawn Daivari?

Where is Shawn Daivari?  I thought I knew where he should be.  H should be in one of the big two wrestling companies.  Sometimes I am puzzled by the careers of some pro wrestlers.   \Daivari is one of those who confuse me.
Daivari has the look, the ability and the personality to go far in wrestling.  Yet, despite moderate success, his career really hasn't reached his potential.  He is only 28, though.
Daivari has wrestled for the three major U.S. promotions (WWE, TNA and the now defunct WCW).  He is usually in an anti-American gimmick and he does it well.  He just never ascended to the top of the card.
Earlier this year, he appeared in Resistance Pro Wrestling.  With his brother Arya, Shawn appeared as a good guy. He is not part of their regular roster though.
Daivari was a nice guy when we met him at an R-Pro event.  He mingled with fans, signing autographs and posing for pictures. 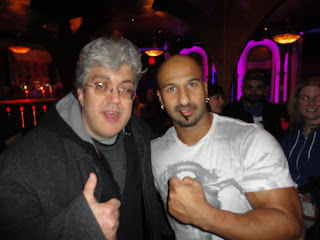