This is a recurring series which attempts to combine my lifelong passion of bubblegum cards with my semi-professional interest in celebrities.  Today we are going old school hockey.

"The Golden Bear" Jack Nicklaus was born in Columbus, OH, and excelled in all sports as a youth.  He chose golf and became arguably the most accomplished golfer of all time.  For this Celebrity Jersey Card, I had to do a little time travel and make a Blue Jackets card for about 40 years before they even existed.  You do those sort of things for a Hall of Famer though! 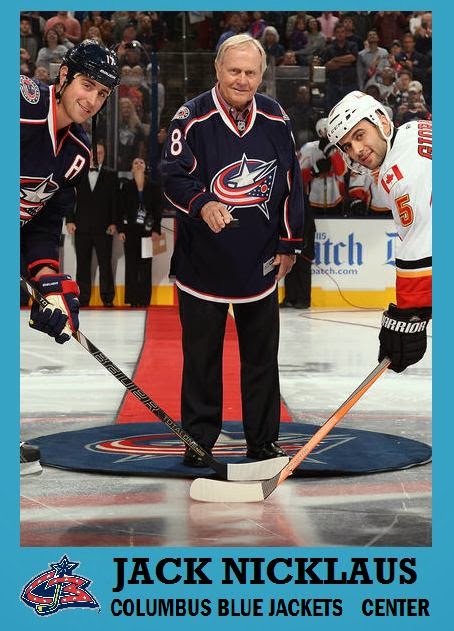 A few years after the Philadelphia Flyers debuted in the NHL, Sylvester Stallone debuted on the big screen.  Although he was born in New York, Stallone will always be associated with Philadelphia, thanks to Rocky Balboa, his underdog character.  Rocky would have made a great brawling defenseman on the old Broad Street Bullies.  He still received thunderous applause at the Flyers game, about 40 years after Rocky first appeared.  I am not sure about his #6.  Since I don't think it represents 2006, I am calling it an homage top Andre Dupont, a member of those Broad Street Bully teams!  Of course, he is listed as a "left wing" on his Celebrity Jersey Card, because Rocky was a southpaw. 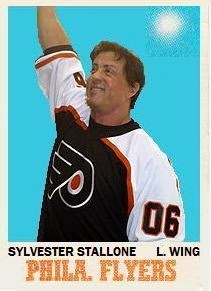