While at last year's Days of the Dead in Chicago, I literally stumbled upon the Truth or Dare booth.  It was a case of great luck on my part.
Truth or Dare is the story of college students who play Truth or Dare with a violent twist.  They become internet stars, but the fun stops when a fan starts playing by his own set of rules.  It was co-written and co-produced by Indy Scream Queen Jessica Cameron.
Cameron and co-star Heather Dorff were promoting the movie (including a showing that night).  They agreed to do an interview with us (which can be found at On the Beat with Jessica Cameron and Heather Dorff).  They were pleasant, easy-going and fun.  While I enjoyed the interview and was interested in Truth or Dare, I had no idea how awesome these women were.
I have done several hundred interviews.  Most of the subjects were friendly.  Some helped promote the interview through some form of social media.  Heather and Jessica have gone above and beyond anyone else though.
Since the interview first aired, it has been promoted regularly on their Facebook or Twitter accounts.  I knew they were tirelessly and passionately promoting Truth or Dare, but I was pleasantly surprised to see my interview so regularly promoted and shared.
I appreciate their passion,  I really appreciate their promotion of our interview.  Rarely have I seen such overall dedication to promoting a project.  I applaud them loudly and publicly.
I felt compelled to write another story here (and will definitely write more in the future).  They deserve the exposure.  Truth or Dare deserves the attention.  These women do not need me or JohngysBeat.com, but since they promoted the interview so often, I want to give a little back and promote them a little more.
The picture below is also from Days of the Dead.  The ladies met actor Danny Trejo.  I love this shot.  The veteran Trejo is sandwiched by the young stars.  Years from now, Trejo will probably brag that he met them.  I know I already brag that I met them.  I only hope to meet them again and get an even better interview!
I highly encourage everyone to check out TruthorDaretheMovie.com to learn more about this intriguing film.  Also, check out JessicaCameron.com and HeatherDorff.com to learn all about these two young stars. 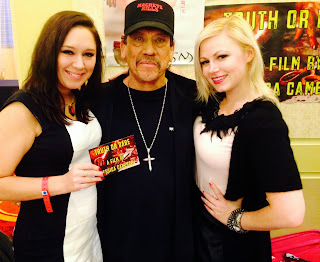 Heather Dorff, Danny Trejo and Jessica Cameron in Schaumburg, IL-November 2013.
Posted by Johngy at 6:00 AM