I have met Amy Dumas (perhaps better known as Lita) many times.  I first met the former WWE star in Cincinnati at the Pillman Memorial event over 10 years ago.  She put on a great performance that night and was very pleasant during the meet-and-greet.
Since then, I have met her many times at various conventions.  Oddly, she doesn't recognize me, like most of the wrestlers do.or maybe she just doesn't say.  In any case, she is always very cool to meet.
Dumas was recently announced as being inducted into the WWE Hall of Fame this April.  She accomplished a lot in her career and had many great matches.  She also had some very impressive moves, especially earlier in her career.
Dumas also has a singing career with her band.  I am not that familiar with the Luchagors, but several of my wrestling friends are fans of the band.  If Dumas is involved, at least you can bet she gives a full effort.
If Dumas is appearing at a convention, I strongly urge you to meet her.  It will be pleasureable for certain.  Plus, you get a Hall of Fame.
I only wish Dumas brought one of her belts with her.  I am not even sure she has the belts from her career, but it always makes for more fun pictures if there is a big shiny belt. 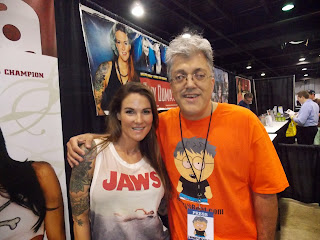