Brimstone (aka Will Kucmierowski) can probably best be described as a creative entrepreneur.  He is a former wrestler who has a line of food products and a comic book series and I am sure he is involved in other ventures, too. You can find out more about him in our interview at On the Beat with Brimstone at Wizard World 2013.  You can also find more updates at EntrancetoHell.com.
At a convention later in 2013, Brimstone met the legendary Stan Lee.  I would love to hear Brimstone's thoughts on meeting Lee.  I imagine he was as excited as I was when I met Roddy Piper for the first time.  Meeting a legend like that is just incredible.
I love seeing celebs get excited about meeting other celebs.  It shows they are just people, too.  It also shows that I am not just a celeb-chaser.  A lot of us like meeting the famous people we watched in whatever field of work.
I hope I get the chance to talk to Brimstone again.  I will certainly ask about his encounter with Lee. 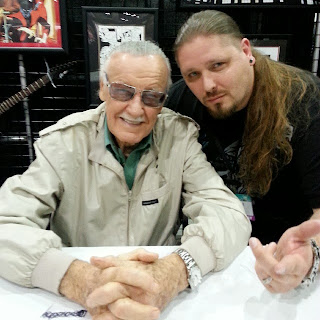 Stan Lee and Brimstone in Los Angeles, CA-November 2013.
Posted by Johngy at 6:00 AM