I was thinking I was really starting to get annoyed with Eugene Cresto.  The guy meets more wrestlers than me.  Lots more.  He seems to have met most every active wrestler from WWE and TNA, as well as many wrestling legends.  I admit I meet a lot of wrestlers, but this guy crushes me in quantity and notoriety.
How does he do it?
Every time either the WWE or TNA has a show or appearance nearby, I see a bunch of pictures of him with the various wrestlers posted on Facebook.  It is torture.  I am jealous.
Then I started thinking, with all of these pictures (and probable stories to accompany them), he could certainly put up an interesting website.  (Cresto's Beat?)  Shhh don't give him any ideas.  With his volume and star quality of wrestlers met, he could put me out of business.
So forget that whole first part of this piece.  I like Eugene quite a bit!  I hope he keeps meeting wrestlers in the future.  (Just stay away from putting up a website about all of them.)
Seriously, Cresto is a great guy.  I see him at a lot of appearances and shows.  I admire his ability to meet so many wrestlers.  He does have a certain knack for it. 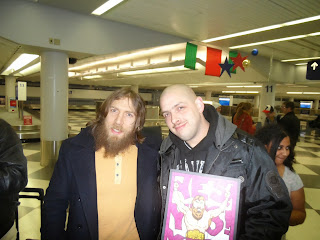 Daniel Bryan and Eugene Cresto in Chicago, IL-December 2013.
Posted by Johngy at 6:00 AM