Loni Anderson still looks fantastic.  The woman in the picture below was 67 at the time of the photo.  That picture was taken 30 years after her hit show WKRP in Cincinnati left the airwaves.
I am not going to argue whether she had any enhancements or improvements over the years.  I am not naive enough to deny the possibility.  If she had any work done, at least I can say it was done well and at the age of 68, Loni still looked awesome.
Loni wears her hair similarly to how she wore it back then, but not in a bad way.  Some older stars cling to their youth or their old image and it just doesn't work.  Whatever Loni is doing is working for her.  She turned heads left and right at the Motor City Comic Con in 2012.
More importantly, Loni was a real sweetheart.  She eagerly posed for pictures and attempted to make her fans happy.  It is the little extra effort from a celebrity which can really make the fan feel special and grateful.
I write all of this and now I admit I was never even a huge fan of Loni.  While she was certainly on my radar, I was actually more of a fan of Jan Smithers (aka Bailey Quarters on WKRP).  I say this to prove this isn't just me drooling over a teenage crush of mine.  Actually, I might have drooled more at Loni at the convention. 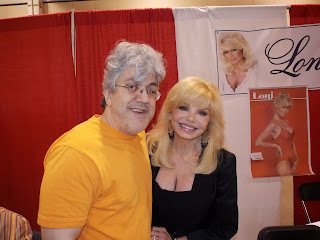 Thanks for sharing. I had similar feelings for Jan Smithers. Okay, now thanks for the memories.