Scott Steiner is a wrestling legend.  Scott Steiner is a wrestler-wanna-be.  Scott Steiner is physically huge, but mostly retired.  Scott Steiner is working hard at getting into wrestling shape and he is just at the beginning of his potential career.  I have never met Scott Steiner.  I know Scott Steiner and see him every month or so.
If all of that is confusing, allow me to clear up the situation.  One Scott Steiner has been wrestling for over 25 years.  I do not know the man also known as "Big Poppa Pump."
The Scott Steiner I know would like to wrestle when he gets of age.  He is also known as "Wonder Boy."
The Scott who I know is a great guy.  Scott and his mom Heidi are fixtures on the Resistance Pro wrestling scene.  One day, Scott hopes to be a fixture in an R Pro ring.
At Wizard World last year, Scott met actor Jason David Frank, perhaps best known as the green Power Ranger.  JDF is quite accomplished in mixed martial arts.  Mock the Power Rangers if you must, but respect this man's power.
Maybe in a few years, Scott Steiner will be as accomplished in the world of wrestling.  I don't doubt Scott.  He's a good guy with a lot of heart.  At some point, you might say that you saw it here first. 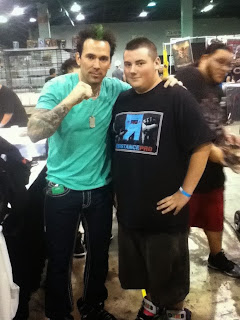 Jason David Frank and Scott Steiner in Rosemont, IL-August 2013.
Posted by Johngy at 6:00 AM