Athletes get trading cards.  Why not celebrities?  At least celebrities wearing athletic jerseys should get cards.  I am doing my best to create cards for jersey-clad celebs.  Here are two celebrities representing teams that should be in the Super Bowl.

Born in Indiana and raised in St. Louis, actress Jenna Fischer somehow became a fan of the Dallas Cowboys.  At least, Fischer is a legit fan.  The star of tv's "The Office" is probably wearing a Marion Barber jersey for her Celebrity Jersey Card, but it makes me nostalgic for old school Everson Walls. 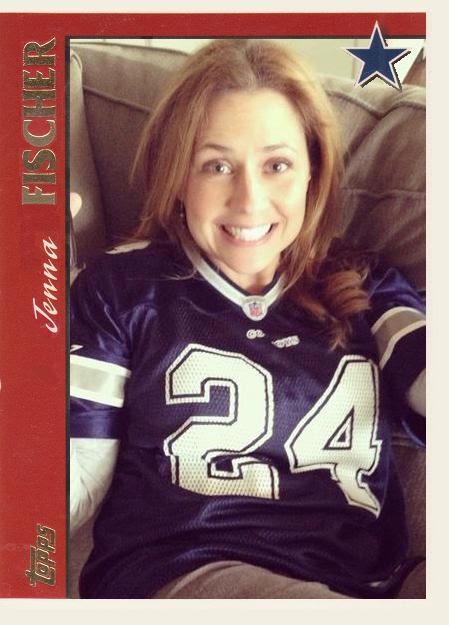 Dwayne Johnson was born in California and played football at the University of Miami.  He became "The Rock" in the WWE, but reverted back to Dwayne when he made a splash on the Hollywood scene.  Confused yet?  More confusing is his appearance on a Celebrity Jersey Card wearing a Denver Broncos Jersey.  For the record, despite some silly internet rumors, Johnson never played for the Broncos.  He never played in the NFL at all, but he was in the CFL briefly.  I am guessing his #1 refers to him being "The Great One" (sorry Jason Elam). 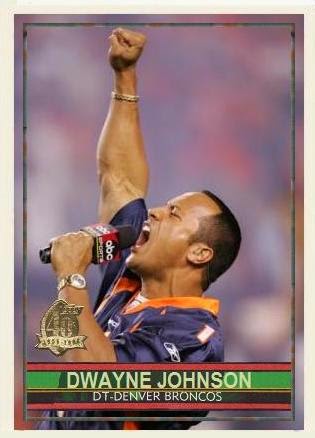 Cute photo of Jenna. Is that a selfie?

I believe it is a selfie.