CM Punk is a Chicago area native and still resides there.  He is a visible sports fan, supporting his Chicago teams all the way.  For his Celebrity Jersey Card debut, he posed with his WWE title belt and former Cub Darwin Barney.  This card is so Chicago! 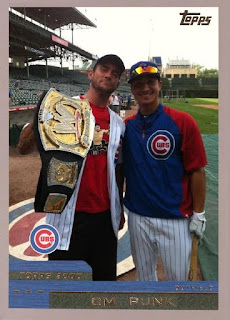 What is a Chicago guy doing wearing a New York Mets jersey?  CM Punk is a wrestler and as a wrestler, he has done some heelish things.  What is more heelish than donning a Mets jersey for a Celebrity Jersey Card.  Including the legendary Paul Heyman is a nice touch, but I would have rather seen Punk's wife AJ Lee. 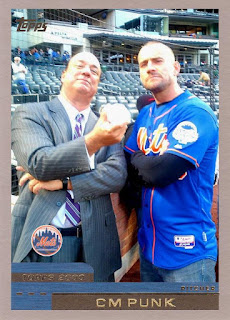