Brian Heffron was born in Philadelphia, PA and has stayed close to his roots.  As "The Blue Meanie," Heffron became a star in the PA-based ECW.  Heffron is one of the nicest guys around.  My interview with him can be found at On the Beat with The Blue Meanie.  Heffron lost a lot of weight, but has kept the Meanie magic.  On his Celebrity Jersey Card, he is wearing a Phillies jersey, naturally.  He's have it no other way. 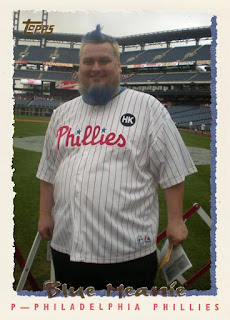 Adam Copeland was born in Canada and has always stayed true to his roots, too.  As Edge in the WWE, he became a superstar.  Neck injuries forced an early retirement, but he is clearly a Hall of Famer.  I got to go horizontal for his Celebrity Jersey Card and if you were a fan of his (especially the "Lita" years, this makes more sense. 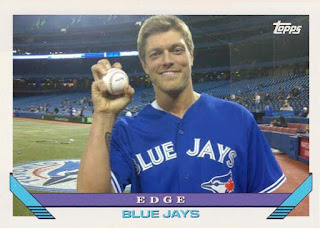