Scott Darling, The IceHogs and the Blackhawks

Congratulations to the Chicago Blackhawks on winning another Stanley Cup.  A few years ago, I would be amazed and ecstatic if they won just one.  Now they have three in the last six years.
I don't get to very many Blackhawks games, but I do cover the Rockford IceHogs their AHL affiliate.  I kept saying that the IceHogs of today are the Blackhawks of tomorrow.  The IceHogs reached the playoffs and sent quite a few players to the NHL this season.  One of those players was goaltender Scott Darling.
I had the pleasure of seeing him play all season and meeting and talking to Darling right before he was recalled by the Hawks.  That interview can be found at On the Beat With Scott Darling of the Rockford IceHogs.  The rest of my IceHogs interviews can be found on the Johngy's Beat Rockford IceHogs playlist on YouTube.
Darling turned in a memorable performance in the playoffs, although he did not appear in the Stanley Cup Finals.  I am sure he will get his name on the Cup though.  The rules are a bit sketchy, but I think the NHL will do right by him.
It was a lot of fun following the Hawks run to the title.  It was also a lot of fun covering the IceHogs for the last few years.  I'm really getting the best of both worlds! 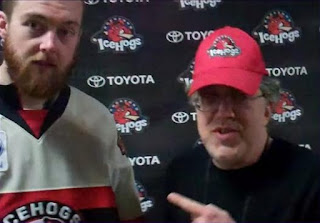