David Herro isn't just a fiend.  As his shirt proclaims, he is a "#SuperFriend."  His shirt doesn't lie either.  David has been a friend of Johngy's Beat for several years.
There aren't many wrestling shows or promoters who can get me to drive 100 miles to see a show.  David and his Great Lakes Championship Wrestling is a rarity indeed.
Every December, Herro puts on "Blizzard Brawl" and this December 5, will be another great GLCW event.  Chyna is a special guest this year.  She joins such wrestling stars as Al Snow, Abyss, Scotty 2 Hotty and many others.  I am also looking forward to seeing Melanie Cruise, one of the best independent women wrestlers today.
At a recent convention, David was accompanied by #SuperFriend Kevin Nash, when they met Johnny Bench, baseball Hall of Famer.  Bench was "the man" when I was growing up.  He was the best and the coolest.  The picture below represents quite an assemblage of talent.  More important, it represents three good dudes.
I hope you make plans to attend Blizzard Brawl.  Johnny Bench won't be there (or maybe he will), but Johngy will be! 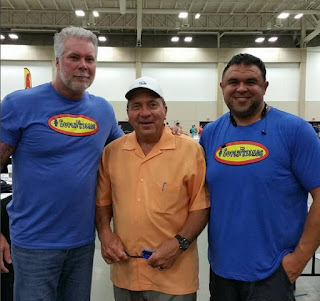 Kevin Nash, Johnny Bench and David Herro in Louisville, KY-August 2015.
Posted by Johngy at 6:00 AM