A native of New York, actor Alan Alda is probably best known for his role as Hawkeye Pierce on tv's M*A*S*H.  His Celebrity Jersey Card comes from his role in Paper Lion, the movie based on George Plimpton's book.  Plimpton has previously appeared on his own Celebrity Jersey Card, also sporting the Detroit Lions uniform. 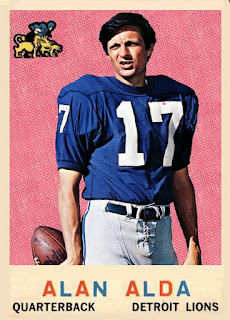 Our favorite "jersey gal" Velvet Sky is back repping the Detroit Lions this time on her Celebrity Jersey Card.  Velvet is wearing the #81 for Calvin Johnson.  I would like to volunteer to cover Velvet while she runs her routes (or does anything else).  The Lions jersey never looked so good as it does on Velvet. 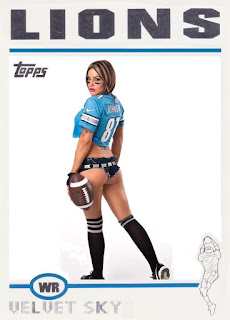