When Jack Keenan ha a Friendly Encounter, he does it in a big way.  It's not often a Friendly Encounter features a group of celebrities.  Jack got a group alright, the Michael Schenker Group.
Schenker is one of the world's bests guitarists.  He got some fame in the Scorpions, then joined UFO.  Since leaving UFO for the first time, Schenker has played with various incarnations of the Michael Schenker Group.  He has also occasionally rejoined UFO.
Jack saw Schenker and his band at a show in Chicago earlier this year.  A backstage pass put him right in the thick of things.  Jack says this photo happened almost by accident.  Although he had been mingling with them all evening, at one point, they kind of found themselves assembled as such and an alert photog captured the moment.  No need to pose when this type of situation does it for you.
Actually, doesn;t this sort of look like an album cover.  Oh, maybe I will need to explain what an album cover is to the younger folks reading this. 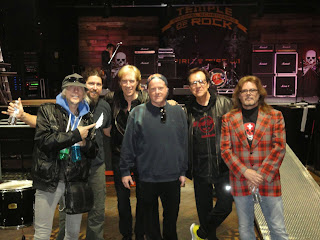 Jack Keenan and the Michael Schenker Group in Chicago, IL-April 2015.
Posted by Johngy at 6:00 AM