The Chicago Bliss are "Pretty. Strong."

Pretty.  Strong. debuts tonight on the Oxygen Network.  Pretty.  Strong. will focus on the Chicago Bliss on and off the football field.
I have had an interesting three year journey with the Bliss.  The league is not always the most press-friendly, but the players and coaches have been nothing but great.  I can't say a bad word about the Chicago Bliss.
Tonight is a bit of an odd night.  I fear my little secret will become national headlines.  Of course, I think the Bliss players deserve every bit of recognition they can get.  They bust their butts for months just to play a handful of games.  Their dedication is amazing.
The root of my angst stems from memories of Jack and I hanging around parctice after practice, being almost a part of the team.  Once the show hits (and even in the last few weeks of publicity), the Bliss have been gaining so much recognition and public awareness that it feels like I am losing my special secret pleasure.  I guess my small loss is the public's big gain.
Tune into Pretty.  Strong. and see for yourself.  I am sure you will jump on the Bliss bandwagon, too.
There are a lot of great stories on the team, but watch out for Jamie Barwick.  I think she might be the under-the-radar breakout of the show.  You read it here first. 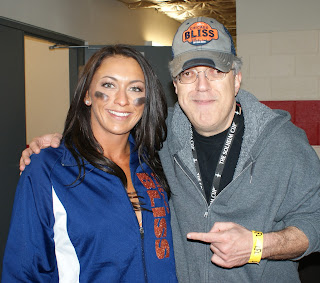