JohngysBeat.com is back on the Beat with the Rockford IceHogs.  Our hockey expert Jason Fleigel joined me for our first trek to Rockford.
We saw a thrilling 4-3 overtime win against our hometown Chicago Wolves.  While it was a case of divided loyalties, I have to admit that I have become more of an IceHogs fan thanks to being around the team for the last two seasons.
My recap of the game and review of the season can be found on Tru School Sports at Rockford IceHogs Move to 4-3.  The story includes links to two media sessions that occurred after the game.
In previous years, we got a few one-on-one interviews, including Jason's with then_IceHog Alex Broadhurst, who is currently with the Lake Erie Monsters, the AHL affiliate of the Columbus Blue Jackets.  (As a side note, Alex's older brother Terry is now playing in Sweden.)  That interview can be found at On the Beat with Alex Broadhurst.  While you are there, check out the other Johngy's Beat interviews on the Rockford IceHogs playlist.
I hope you enjoy our coverage of the IceHogs as much as we are enjoying covering the team.  For more info on the IceHogs, check out IceHogs.com. 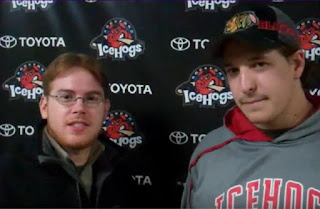