What a life James Janos has lived.  Better known as Jesse Ventura, he was born in Minneapolis, MN, became a Navy Seal, a Hall of Fame professional wrestler, a successful actor and the Governor of Minnesota.    I will never forget watching the results come in as he won the election.  It was one of the most improbable victories in politics.  Ventura has remained outspoken and is always willing to discuss his conspiracy theories, either in book or television form.  Ventura's Celebrity Jersey Card is a bit different, but so was he.  It somehow seems fitting. 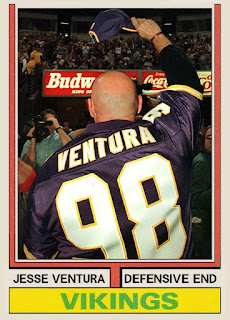 Actor Josh Duhamel was born in North Dakota and first gained stardom on television's All My Children.  He moved onto a starring role in tv's Las Vegas and has ventured into major motion pictures.  For his Celebrity Jersey Card, Duhamel donned Jim Kleinsasser's #40, while holding his child. 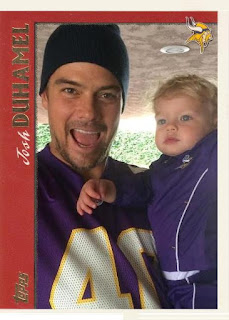