Today's Friendly Encounters is a special edition celebrating Jim's birthday.  It also focuses on a celebrity encounter that I missed (not that I am bitter).
We were all in Las Vegas to celebrate Matt's last few days of being single.  Buddy Guy was playing in our hotel.  I give Jim credit, because he recognized the blues legend right away in our lobby.  Nobody was completely certain it was him though.
Meanwhile, Scott and I were dealing with the front desk over an issue with one of the rooms.  Jim and Jason decided to approach Guy at that same moment.  They briefly talked to him and got a picture, all while I watched from afar.  Darn them!
It's not really a huge deal.  Jim is much more of a fan than I am.  I would have liked to have been included, but I am glad they got the chance and the picture.  I do say that Jimmy owes me a celebrity encounter though!
Here we are on Jim's birthday and I want to wish him a great day.  He's a dear and thoughtful friend (when he isn't stealing my celebrity encounters).  Believe it or not, in addition to our endless trivial conversations, we have had many deep, thought-provoking chats.  I am proud to consider Jim one of my closest friends.  I know I can always count on Jim no matter what.
Happy birthday Jim!  (Just because it is your birthday, I am not going to wipe away your celebrity debt!) 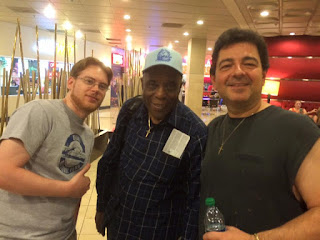 Jason Fleigel, Buddy Guy and Jim Gekas in Las Vegas, NV-September 2015.
Posted by Johngy at 6:00 AM

Happy belated birthday to Jim!
Hope you had a great day and best wishes for a great year!

Happy belated birthday Jim. Hope you had a great day!