Athletes get trading cards.  Why not celebrities?  At least celebrities wearing athletic jerseys should get cards.  I am doing my best to create cards for jersey-clad celebs.  Today, I am continuing the series of opponents of the Bears.

Ashleigh Nickerson's appearance on "Celebrity Jersey Cards" is the first time a former player's relative (daughter) makes an appearance.  Former linebacker Hardy Nickerson's daughter is a young singer.  She isn't big enough to really play linebacker, but with her father's training and genes (and jersey), it seemed the natural position to list.  Ashleigh gets extra points for going old school creamsicle. 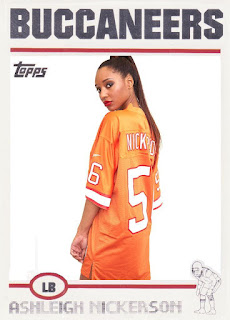 In a rare instance, both Celebrity Jersey Cards are from the same Topps set.  Velvet Sky makes another appearance, this time wearing the newer Buccaneers jersey, giving a nice juxtaposition against the throwback jersey of Nickerson.  Velvet is wearing Vincent Jackson's #83. 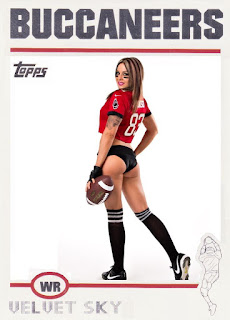