Devin Hester was a record breaking kick returner for the Chicago Bears.  They accomplished what no other team could do.  They stopped him or at least slowed him a lot by making him a below average receiver.  Why they took a huge strength and weakend two positions is beyond me, but the Bears coaches did just that.
After eight seasons with the Bears, Hester signed with the Atlanta Falcons and had a decent 2014 season.  He has not played yet this season and is currently on the Injured Reserve list.
While in Chicago, he had the pleasure of meeting Deena Fagiano, one of the stars on the two time Legends Football League champion Chicago Bliss.  I'll be Hester did not try to outrun Deena.  Who would?
Deena is a valuable part of Coach Keith Hac's offense.  He uses her sparingly, but effectively.  Every game she will have one or two rushes and receptions.  She is sort of a secret weapon.  If only the Bears coaches were smart enough to play to Hester's strengths.  This is further proof that Coach Hac knows his stuff. 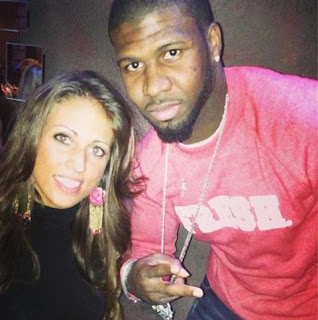 Deena Fagiano and Devin Hester in Chicago, IL-January 2013.
Posted by Johngy at 6:00 AM