This is a regular series which attempts to combine my lifelong love of sports trading cards with my semi-professional interest in celebrities.  Today, once again, I am featuring the opponent of the Chicago Bears.


Comedian Tim Allen has a history of showing love for his hometown of Detroit.  Never before have we seen such love as in his Celebrity Jersey Card.  He not only wore a Lions jersey, but he did the full uni, including spikes.  Actually, this was from a Halloween party, but it still counts. 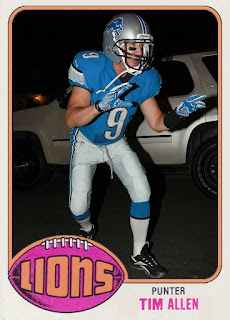 Remy Olinzock played defensive back and wide receiver for the (now defunct) Toledo Crush of the Legends Football League.  Her hometown is Star Junction, PA.  None of this explains her Lions jersey, but who cares?  She wears it better than any other #81, including star receiver Calvin Johnson. 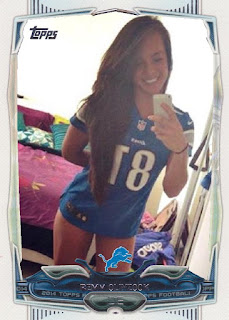