Tony Feddeler is a major fan of the Chicago bandits, but he is no one trick pony.  He is also a frequent guest at various comic or celebrity cons.  In fact, I am sure I crossed paths with him many times before I "officially" met him at the Bandits ballpark.
At one comic con, Tony met scream queen Danielle Harris.  The lovely Harris is best known for her role in four of the Halloween movies.
Hmmm Tony and an attractive, fit woman?  That does sound a bit like him at the Bandits games, not that I blame him. 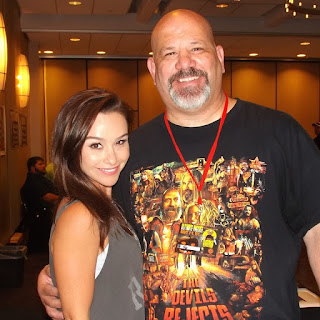