Celebrity Jersey Cards is a regular series which attempts to combine my lifelong passion for sports trading cards with my semi-professional interest in celebrities.

Clint Hurdle burst onto the scene as a Sports Illustrated cover boy phenom with the Kansas City Royals.  While he never lived up to the superstar predictions, he did carve out a solid major league career.  In his managerial career, he has been enjoying success with the Pittsburgh Pirates.  He even donned the Penguins jersey in a sign of mutual love for his adopted city.  His Celebrity Jersey Card would fit in well with the Topps set of that year. 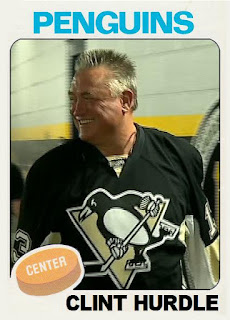 Yadier Molina is one of three Molina brothers to play major league baseball.  The most successful of the three, Yadier has spent his entire career with the St. Louis Cardinals.  He has put his name among the all-time best catchers for the Cardinals, but he still needs a couple of solid seasons to pass Ted Simmons in hits (by a Cardinals catcher).  I do like seeing his son (in a Blues jersey no less) sharing his Celebrity Jersey Card. 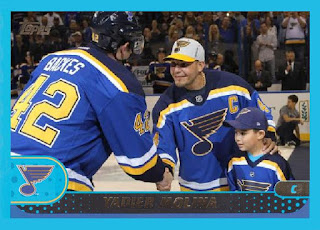