Friendly Encounters is a weekly feature about my friends meeting celebrities.

This is a real heart warming Friendly Encounters entry.  I first met Estela Pinon during her time with the Chicago Bandits.  My interview with her can be found at On the Beat with Estela Pinon of the Chicago Bandits 2014.  The Bandits selected the Arizona pitcher in the 2014 draft.
Pitching is apparently the key for Pinon.  She began dating Kenny Giles, pitcher for the Philadelphia Phillies.  Love blossomed between the two.  Giles popped the big question on a ball field (of course) and Pinon accepted.  Don't they look like a happy couple?  The duo recently got married.  (Why wasn't I invited or at least asked to cover it?  LOL)
Giles also recently got traded to the Houston Astros.  This is another positive for Giles, as the Astros should be considerably better than the Phillies in the near future.
Even though I wasn't invited to their wedding, I do want to wish the couple a lifetime of happiness.  Pinon was super nice during her time with the Bandits and we miss her in Chicago!  Houston is getting a great couple! 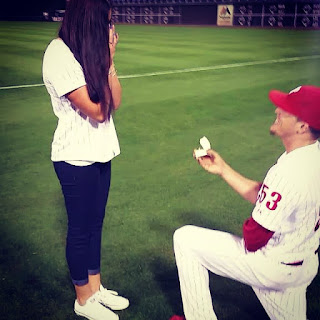 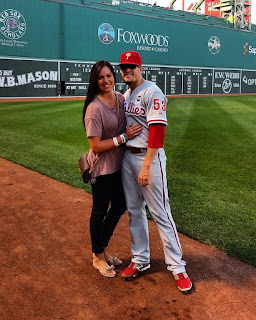 Estela Pinon and Kenny Giles in Boston, MA-September 2015.
Posted by Johngy at 6:00 AM