Tommy Dreamer made a name for himself as the "Innovator of Violence" during his great run in ECW.  He has wrestled elsewhere, but he will always be remembered most as an ECW Original. Dreamer appeared at the recent Blizzard Brawl 11.  David Herro's yearly event has been a staple on my calendar for years.  The Brawl is always a great event, filled with many wrestling superstars, like Dreamer. This year's Brawl ended oddly.  Herro lost a match to Abyss and thereby lost control of Great Lakes Championship Wrestling and Blizzard Brawl.  Dreamer entered the ring to save Herro from a further beating from Abyss and also to make an offer. Dreamer wants to bring his House of Hardcore event to Waukesha next December.  Herro accepted.  How this will all play oput is anyone's guess.  That's why everyone needs to keep following Herro and GLCW. The one thing I know is, if there is any sort of GLCW, Blizzard Brawl or House of Hardcore event, I will be there covering it and enjoying it. 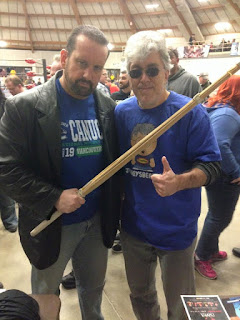