Jack Keenan has been a great addition to the Johngy's Beat family.  He started out as emergency relief, but I slowly have drawn him into a much more regular role.  He has been my regular guy for the Chicago Bliss, the Chicago Bandits and Days of the Dead in Chicago.
At the last Days event, he was all over the place setting up stuff and getting things in order.  He was a big hit with the celebs we encountered, including (or especially) P.J. Soles.
P.J. and Jack had a great rapport going.  They were like old friends.  I am almost surprised I actually squeezed in my real work with these two.
Seriously though, help like this is always most welcome.  Getting the celebs at ease is a great start.  P.J. knew us already from previous encounters, but with all of the other demands on her time, every positive thing in our arsenal is a good thing.  Jack even got her to do a Johngy's Beat promo (which is in the left column of promos).
It's a rough job and Jack is an ace at it.  You can tell how much he suffers for the craft by the look on his face in the picture below.  As I wrote, it's a tough job. 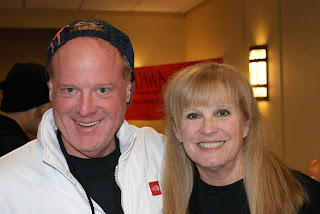 Jack Keenan and PJ Soles in Schaumburg, IL-November 2015.
Posted by Johngy at 6:00 AM