This is a regular series which attempts to combine my lifelong passion for trading cards with my semi-professional interest in celebrities.  Today, we start working our way alphabetically through Major League Baseball.

Tony Danza represented the Anaheim Angels in "Angels in the Outfield."  Interestingly, Danza previously repped the St. Louis Cardinals in his role on tv's "Who's the Boss?."  He also did the same for the Philadelphia Eagles in "The Garbage Picking Field Goal Kicking Philadelphia Phenomenon."  That's quite a legacy of jersey-wearing for Danza.  Unlike his role in a Cardinals uni, there are plenty of pictures of him with the Halos, which allowed me to create this Celebrity Jersey Card. 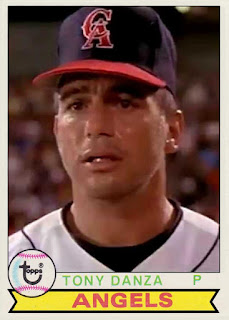 Actor Barry Williams rose to fame as Greg Brady on tv's "The Brady Bunch."  I believe he was a Dodgers fan on the show though or maybe it was just for the storyline when he was a young pitcher.  For his first Celebrity Jersey Card appearance, Williams is wearing an Angels jersey while probably singing the National Anthem (or maybe the Brady theme?). 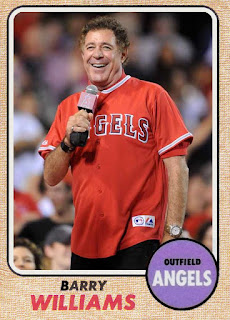