I met Nick Hausman years ago, while he was a manager on the Chicago wrestling scene.  He was a young guy, with charisma, energy and drive.  Fast forward a few years and he is no longer an active performer.  Instead, he has moved to the other side and is currently covering wrestling for WrestleZone.com.
At the recent C2E2, Nick interviewed me.  That interview can be found at WrestleZone.com's Nick Hausman Interviews Johngy at C2E2.  After joking a bit about the confusion over pronouncing Johngy, Nick asked me about local wrestlers who should get a look by the big leagues.
That is a simple question, yet it is also a loaded question.  It is tough naming a few people and leaving off some very talented wrestlers.  Even so, very talented wrestlers don't necessarily make it to the WWE (or TNA).  I didn't want to just pick my favorite Resistance Pro wrestlers, although even that would have been hard with all who I have seen over the years.
In the end, I chose two wrestlers who have gotten looks by the WWE or TNA.  These two have what it takes.  I also picked an excellent wrestler with a great gimmick, which would work, especially in the WWE.  Finally, I picked the best woman on the scene right now.  She will be a star in the WWE at some point.
Getting back to Nick, he is a tireless worker.  When I first saw he joined WrestleZone.com, I wasn't surprised.  If he ends up with the WWE, I won't be surprised.  He's one of those guys who will work his way through the business.  With a break here or there and continued drive, there's no telling where Nick might land.
I am not fluffing Nick because he interviewed me.  In fact, I had messaged him prior to C2E2 to ask if we could meet up for a quick picture for my coverage.  He asked me for the interview on the spot.
You can check out Nick's work on WrestleZone.com.  WZ is a regular stop on my daily web surfing.  If you like wrestling, WrestleZone.com is for you. 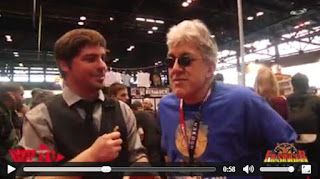