Out of all of my friends, Jason Fleigel is probably the biggest hockey fan.  What he lacks in trivial knowledge, he makes up for in current knowledge and passion.
He is my "go-to" guy for assistance when I cover the Rockford IceHogs.  Who better to bring than hockey boy?
Recently, Jason has been on a hockey roll.  Earlier in the year, we met Blackhawks legend Dirk Graham at an IceHogs game.  More recently, he met his heor Martin Brodeur at a Chcago Wolves game.  He also met broadcasters Eddie Olczyk (also a Blackhawks legend) and Pat Foley.  That's quite a Blackhawks threesome right there.
I am proud that Jason was able to control himself when meeting them.  Knowing Jason, I can understand how difficult it had to have been. 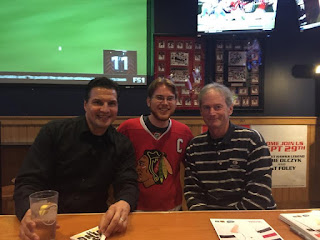 Eddie Olczyk, Jason Fleigel and Pat Foley in Schaumburg, IL-Winter 2015.
Posted by Johngy at 6:00 AM

What a great day for Jason!!