Six-time NBA All-tar Shawn Kemp was born in Indiana and played 8 of his 14 seasons with the Seattle SuperSonics.  Unfortunately for Kemp and his Sonics, they reached the NBA Finals during the season when the Bulls set the (then) record for wins in a season (72) while on the way to their 6th title in 8 years.  Kemp was honored by the Seattle Mariners, which explains his Celebrity Jersey Card. 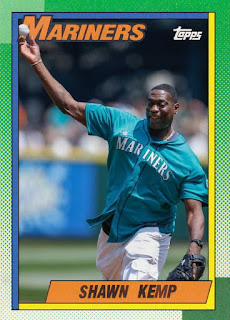 Basketball Hall of Famer Bill Russell came out of Louisiana to win 11 NBA titles in 12 yeaqrs for the Boston Celtics, including 2 as a player-coach.  Later, he coached the Sonics and the Sacramento Kings, without as much success.  He returned to Seattle for the ceremonial pitch honors and to make his way onto a Celebrity Jersey Card. 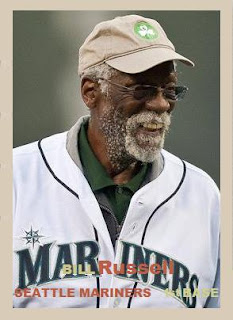