Deena Fagiano is one of a handful of Chicago Bliss players who have been on the team for all four seasons I have covered them.  Deena is one of my favorites, too.  As an under-the0radar Italian runner-receiver-lineman, she fits the mold.  As a person, she breaks the mold.
Deena is funnya nd fun.  She is entertaining, intelligent and goofy (in a good way).  She often gets overshadowed on the Bliss by bigger names with bigger stats, but Deena is a consistent contributor, appreciated by coaches, teammates and true fans.
Last season, she was one of the eight players featured on Pretty.  Strong., the docu-series focusing on the Bliss.  Chicagoan Steve Harvey got Deena to appear on his show.
The episode turned a bit cheesy, as part of it was about finding a date for Deena, including her throwing real passes to a couple guys.
It's kind of cute, but seriously, Deena can't have any problem finding dates.  If she does, I'm sure there are hundreds of guys at any Bliss game who would gladly take her out.
Still, it was entertaining and it gave Deena more exposure and that is all good.  The LFL itself is under-the-radar and I really cannot understand that.  These ladies deserve our attention. 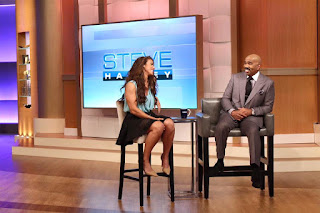 Steve Harvey and Deena Fagiano in Chicago, IL-Summer 2015.
Posted by Johngy at 6:00 AM