One of the first wrestlers I interviewed at Resistance Pro was Serenity.  Despite her serene ring name, this young talent was a bundle of energy as you can see in On the Beat With Serenity, one of our first interviews with her.
Serenity wrestled for several months at RPro and continued to hone her craft in downstate Illinois.  She was young and eager to learn and she was great with the young fans.  Who wouldn't like this bouncy, charismatic young lady?
I am willing to bet wrestling legend Ric Flair enjoyed meeting Serenity as much as she enjoyed meeting him.  I just love this picture.  Flair's career started about twenty years before Serenity was even born.  I love the juxtaposition of a wrestling Hall of Famer like Flair with the young, wrestling hopeful Serenity.  They are opposite ends of the spectrum, but both wrestling professionals.
Even for non-wrestlers, meeting Flair is like meeting wrestling royalty.  I am happy to say I have met Flair a few times.  I am also happy to say I have met Serenity a few times. 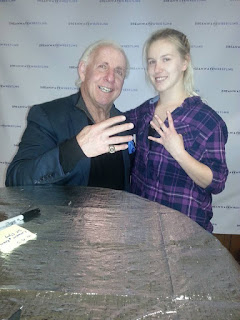