"Cards That Never Were" is a recurring series in which I create virtual trading cards for players who were missed in the original sets.  It is a concept I have borrowed from too many others to list, but I thank them all.
Catcher Mike Ryan made his major league debut with the Boston Red Sox in 1964.  Topps rewarded him with a multi-player "Red Sox Rookie Stars" card.  After four seasons in Boston, he was traded to the Philadelphia Phillies, where he played for six seasons.  Philadelphia traded him to the Pittsburgh Pirates, where he played the 1974 season.  He was released in October, ending his major league career.
I understand the decision by Topps not to include Ryan in the 1975 set.  Still, that does not prevent me from making one for him.  This would be a "career capper" for him, as well! 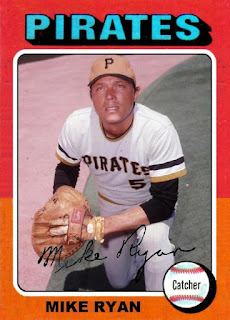