This is a weekly series featuring friends who have met celebrities.  If you have met a celeb, feel free to send me the picture.

With the Chicago Bandits back in action, it is a great time to feature a friend I have met through the Bandits and one of the cornerstones of the Bandits.  Actually, I am happy to say I can count both people as friends.
There is a rumor that the Ballpark in Rosemont was built around a ahandful of fans and Tony is certainly one of those.  He is a fixture behind the home plate area at most games.  He is a great fan of the team, but also celebrity conventions.
Emily Allard has quietly become one of the team leaders.  She is a talented outfielder who also is giving back to the youth with her "Be The Momentum" program.  The mission of Be The Momentum is to empower slap hitters to be catalysts for game-changing moments.  In other words, you don't have to be a power hitter to be a producive player.  This is a bit of a game-changer for some young softball players who might lack the size and strength to be a thumper, but can still contribute to the team.
The picture below would be one I would put in a Bandits recap story.  The fans are so loyal and the players are so friendly.  You can see both of these fine people at the Ballpark through early August.  Check out ChicagoBandits.com for more info and schedules. 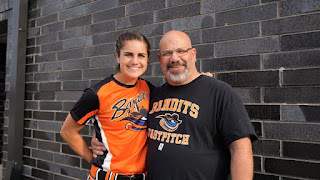