Singer Christina Aguilera was born in Staten Island, NY.  She gained a lot of fame from her stint on tv's The Mickey Mouse Club.  She released her debut album in 1999 and has been on the rise ever since.  She sang the National Anthem for the Pittsburgh Pirates and earned her Celebrity Jersey Card.  I assume her #1 is just for her, as the last Pirate to wear it was in 1947 and only three Pirates ever have worn it.  It does work well for Ms. Aguilera! 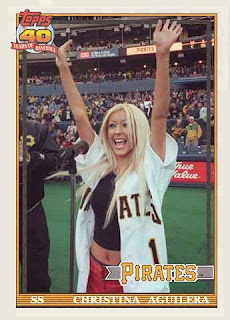 Boxer "Iron" Mike Tyson is a native of Brooklyn, NY.  At his peak, he was a dominant boxing champ.  Unfortunately, he battled demons and spent time in jail.  His career faded, but his legacy remains.  I listed him as a "Pitcher" on his Celebrity Jersey Card, because the National League did not have Designated Hitters back in 1986. 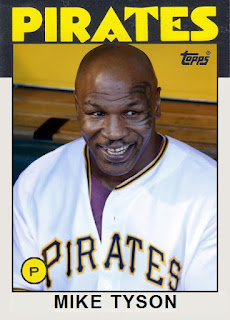