When my (not-so) little cousin Noah mentioned Anime Midwest to me, I was up for experiencing something new.  I applied for press credentials and the fine folks at Anime Midwest granted my request.  My pre-convention piece can be found at on the Patch.com at Anime Midwest Invades Rosemont.
One of our primary targets was Chuck Huber, voice actor, ADR (automated dialogue replacement) director and ADR script writer.  Huber's resume is extensive, especially in Anime, but he has also done video games, television, webcomics and more.
We first met Huber at his booth, where he talked to everyone and happily took pictures with people.  He even handled the selfie part for a handful of people.  He was extremely fan-friendly.
Later in the day, we attended his Acting Panel.  He answered a ton of questions.  He told a bunch of interesting and funny stories.  He did a short acting exercise.  In short, he kept everyone captivated for about an hour.  At a convention with actuon everywhere, keeping this type of interest for that long is impressive in itself.
I walked away very impressed with Huber.  I hadn't known much about him pre-convention, but I find myself now looking for more info on him.  (For instance, he has over come a heart attack.  Also he has six children.).
Huber was just the start of our fun at Anime Midwest.  It was my first time at this cool convention and I am planning on attending their next event in my area.  It was run very smoothly from start to finish.  There were a ton of vendors, great celebrity guests (like HUber) and the crowd was in such a fun and lively mood.
I recommend Anime Midwest to any anime fan, as well as anyone who might want to try something new.  You can find more info at AnimeMidwest.com. 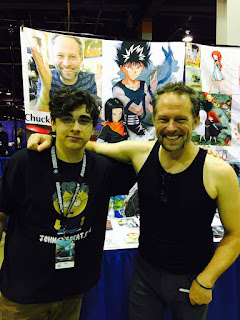