I've had Eugene Cresto here many times.  Usually I am lamenting the fact that he met some cool celebrity and I did not.  Today, that is only half the case.
Eugene did meet wrestling star John Cena (yes, he qualifies as a cool celebrity in my opinion), but so did I.  I don't care that Eugene met him first and probably has met him a few times.  I only care that at Wizard World in Chicago a few months ago, I met Cena, too.  Eugene doesn't have that one on me.  Even when he first published the pic with Cena, I knew my time was coming and I did not get (too) annoyed that he met him.
He does have a bunch of other great celebs who I never met.  He is very strong on the wrestling scene, but he also has met other mainstream celebs.  I think I matched him pretty good at this year's Wizard World.  That's a big accomplishment, because Eugene is a legend in this field.
Eugene is a great guy.  I love the pics he posts with his caricature and celebs.  I also always love seeing his kids in the pics.  He and they seem to have so much fun.  At least in the case of Cena, I had that fun, too. 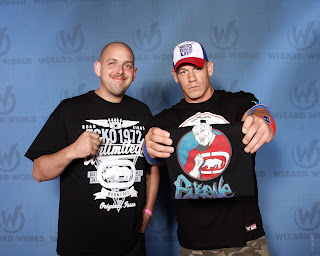