This is a regular series where I create virtual trading cards for celebrities wearing sports jerseys.  Only two more games to play (although it really ended several weeks ago).

Kris Bryant finished his season as a champion.  The versatile Bryant probably would have made an excellent football player, too.  For his Celebrity Jersey Card, he donned the #89 worn most famously by Hall of Famer Mike Ditka.  Unfortunately, the name portion of this card is less than perfect.  Darn Topps and their fancy text. 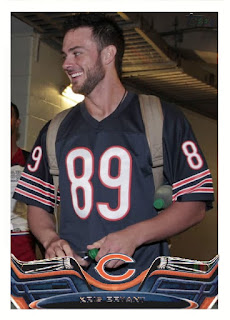 A native of the Minneapolis–Saint Paul area, Nick Swardson is an actor, comedian, screenwriter and producer.  He might be best known for his work on television's Reno 911! or his sketch comedy series Nick Swardson's Pretend Time.  Swardson stayed true to his Twin Cities roots for his Celebrity Jersey Card, by sporting the Vikings #84, probably Randy Moss, jersey.  Some might say the card is off-center.  I say it artistically features the field. 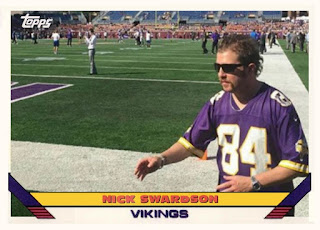