This is a regular series where I create virtual trading cards for jersey-clad celebrities.  Last year, these teams played in the Super Bowl.

Mike Greenberg was born in New York, but went to school and started his career in Chicago.  He's been with ESPN for over 20 years.  For his Celebrity Jersey Card, he donned the Broncos jersey.  Was the #13 for Trevor Siemian or just a personal thing for Greenie? 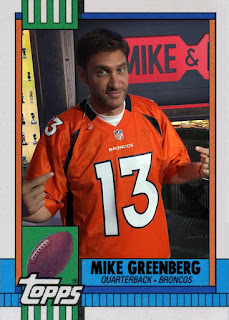 Former Major League Baseball player John Olerud played for five teams in his career, including the Seattle Mariners.  As a Seattle native, that had to be a thrill, as was raising the 12th Man flag for the Seahawks.  I'm thinking the third biggest thrill was making it on a Celebrity Jersey card! 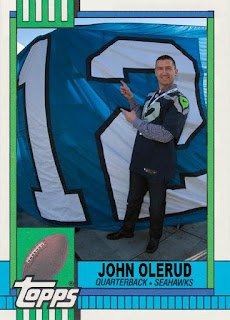