Darn it.  Eugene Cresto did it again.  He one-upped me and got Lea Thompson at the Motor City Comic Con 2016.
Eugene is one of the few people who consistently beats me at meeting celebrituies.  His Facebook page is fille with celebrities of all sorts going back several years.  His main targets are wrestlers, but he doesn't limit himself to the squared circle.
Such was the case at the recent MCCC.  He met actress Lea Thompson, who rose to fame in Back to the Future.  Theoretically, I could have met Thompson, too.  Unfortunately, every time I went by her booth, she wasn't there.  My timing was way off.  Maybe I needed more persistence, because Eugene managed to meet her, as well as everyone else I met.
I swear, he must have clones of himself to accomplish all of this.  I'm going to keep a close eye on Eugene.  I'll either learn his secrets or I will figure out his strategy.  One way or another, I should improve my celebrity-meeting skills. 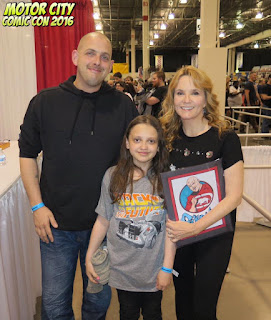