Cards That Never Were is a recurring series in which I create virtual trading cards for players missing from various sets over the years.  It is a concept I have borrowed from far too many to list, but I appreciate all of them.
Today's card is one I have wanted to do from the very beginning of this series.  It has been my white whale.
Eddie Leon was one of my first favorite players.  I loved his 1974 Topps card.  In the powder blue and red Chicago White Sox uniform, Leon was at shortstop in mid-throw to first.  It was such a cool card.
Leon debuted in 1968 with the Cleveland Indians.  His six games and one plate appearance did not merit inclusion in the 1969 Topps set.  He played with the Indians through the 1972 season.  He was traded to my beloved Sox and played two seasons in Chicago (replaced by Bucky Dent).  After the 1975 season, he was traded to the New York Yankees, for whom he logged in one game and no plate appearances.
Leon appeared in Topps sets from 1970 through 1975.  Along with missing the '69 set, Leon did not make the cut for the 1976 set.  I do not argue that decision by Topps, but because I like Leon and I always have a soft spot for the 1976 set, I had to try to create a card for him.
Getting a color decent size pic of Leon in the Yankees uniform proved to be a challenge.  Then one day, while doing random image searches, up popped Leon with the Yankees.  I couldn't wait to creat the long-awaited 1976 card.  I'm pretty happy with how it turned out, too. 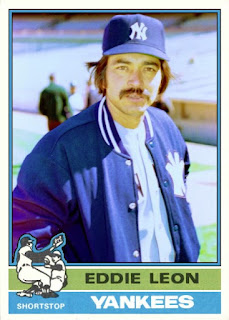