Cards That Never Were is a recurring series in which I create virtual trading cards for players who were missing in various sets.  It is a concept I have borrowed from too many to list, but I appreciate all of them.
Ernie DiGregorio was selected by the Buffalo Braves (now the Los Angeles Clippers) third overall in the 1973 NBA draft.  Despite being listed at 6'0". Ernie D was a major star at Providence and looked to have a bright future in the NBA.
His rookie season of 1973-74 was excellent.  He averaged 15.2 points per game and still holds the NBA rookie record for assists in a single game with 25 (a record now shared with Nate McMillan).
After four seasons with the Braves, he was traded to the Los Angeles Lakers.  After only 25 games, the Lakers waived him and the Boston Celtics signed him.  He appeared in 27 games with the Celtics ending his NBA career.
Topps issued cards for him from 1974-'75 through '77-'78.  He did not receive a card in the 1978-'79 set.  Since DiGregorio was one of my favorite players growing up, I had to correct this.  Although not many pictures of him exist with the Celtics (even fewer exist of him with the Lakers), I was able to make a decent card that never was for him. 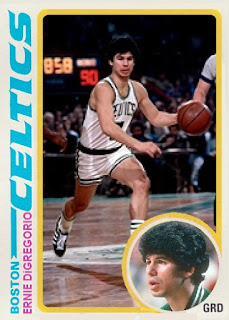 Was a huge Friars fan back when Ernie played. Along with Barnes And Stacom.