I have never met Jason Strecker, but we recently connected online.  We share an interest in wrestling and he has a very cool story and an awesome connection to wrestling.  I'll let Jason take it from here:

"I am friends with WWE Hall of Famers Nikolai Volkoff and Jimmy Valiant. It was Jimmy Valiant, who originally brought Nikolai and myself together, knowing we both live in the Baltimore County area of Maryland. I attend east coast autograph signing conventions with Nikolai and help him set up his table and take photo ops with the fans.  A few years ago, I sold a few of his ring worn pieces of memorabilia on ebay, including one of his famous Russian Bolshevik hats, a pair of red Russian boots, black boots he wore during his feud with Bruno Sammartino and the most popular wound up being his black "cent" shirt he wore when working with Ted Dibiase.
Most recently, I have been proud to have a small part in helping bring about "Nikolai Volkoff the Comic Book Series." During many of our personal discussions, Nikolai had expressed interest in having his life and pro wrestling story told via comic book form. The comic book series is a three part series written by comic book writer John Crowther, another long time wrestling fan, I introduced John to Nikolai knowing John would be the perfect person to make Nikolai's comic book dream come true. Nikolai's comic has been trending highly through the kickstarter program where fans can pledge money towards funding the comic, in exchange for great incentives such as autographs, toys, cards, t-shirts and even a personal phone chat with Nikolai.
Nikolai is a legend from what many call the 'glory days' of wrestling, the 1970s, 80s and 90s and he still is active on the independent wrestling show and autograph signing circuit. Fans looking to book Nikolai may contact me through email wresjay@hotmail or my ebay ID (colmashfan). Fans can also check out facebook page Nikolai Volkoff: The Comic Book Series for all the information about this great comic book and fans will soon be introduced on this site to writer John Crowther, who is set to work on several other wrestler related comic books along with Nikolai's!"

I want to thank Jason for reaching out to me.  I am always happy to meet fellow fans of the golden days of wrestling.  I am also always happy to spread the word on great projects like Nikolai Volkoff: The Comic Book Series.
Volkoff had a very interesting career.  He spent much of it as a hated heel, but turned to the good side late in his career.  He is still much beloved by fans, despite being out of a WWE for many years.  Anyone wanting to support this cause and jump on the bandwagon now can head to the Nikolai Volkoff - Life & Times of a Pro Wrestling Superstar Kickstarter page.
I will continue to follow the progress of this series.  I hope to one day meet Volkoff, Crowther and Jason. 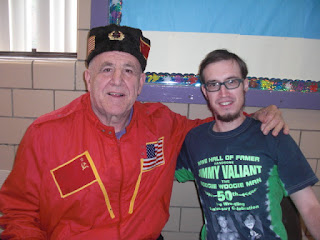 Nikolai Volkoff and Jason Strecker in Glen Burnie, Maryland-2013.
Posted by Johngy at 6:00 AM