One of the great parts of doing Johngy's Beat is the friends who I make from it.  Last week, I featured Jason Strecker here.  This week, I continue the story with John Crowther, whom I met through Jason.
According to his bio, John is "a small town southern lawyer by day and storyteller by night."  He turned professional storyteller in 2014, when he entered the world of comics.
After the success of the Rochelle: The Teen Cockroach series, he tackled the world of professional wrestling.  He is the writer and co- creator of the Nikolai Volkoff series.
A pro wrestling veteran of 50 years, Volkoff (Josip Peruzovic) is best known for his years in the WWE (then WWWF/WWF), including a tag team championship (with The Iron Sheik) and a Hall of Fame induction in 2005.  The series is based upon true stories as related by Volkoff.
The Nikolai Volkoff Kickstarter campaign officially ends tomorrow.  While they have already reached their goal, donations are still welcomed and there is even an incentive system for various levels of donations.
I asked John about the future of the Nikolai series and other wrestling comics.  He responded with:

"I am also working on projects for The Killer Bees (Brian Blair and Jim Brunzell). Issue #1 of that series launches on Kickstarter on June 18. Also in the works are a one-shot for Lanny Poffo and a miniseries for Bobby Fulton on him and The Fantastics.  I am not planning another NIkolai in the near future, although he will be appearing at Mississippi Comic Con on the weekend of June 24."

That's all great news.  Wrestler biographies in comic book form sounds like a winner to me.  I'm especially happy with his subjects so far.  Volkoff, Poffo, the Bees and the Fantastics all had great careers, but very little has been done on them.  I look forward to those projects as well as other stuff from John in the future.
Someday, I hope to meet John at one of his appearances.  Chicago is a hotbed for wrestling and comics, too.  I think a Chicago convention appearance by John and one of his wrestler subjects would be awesome.
You can get more info, including all of the updates, at the Nikolai Volkoff: The Comic Series page on Facebook.  You can also check out all of John's work at RochelleTheTeenCockroach.com. 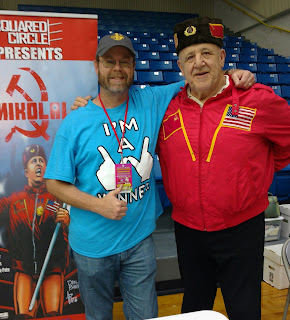 John Crowther and Nikolai Volkoff in Daytona Beach, FL-April 2017.
Posted by Johngy at 6:00 AM